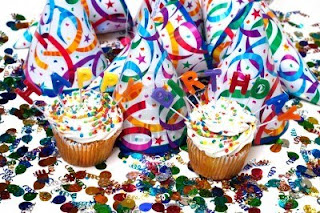 I dare say Billy Collins is becoming one of my favourite poets! He's so droll and blasé, but at the same time, able to make the most profound and illuminating revelations.
So since today is my birthday, I thought I'd indulge in this little birthday musing from him (unlike the greeting card messages - it really makes you think!). A day, which he links to New Year's Day, our 'second' birthday, and one in which you rightly celebrate your 'presence here on earth', 'the joyous anniversary of my existence'.
And  - live it up, before we meet our 'death' day - 'an X drawn through a number in a square on some kitchen calendar of the future,' 'the day when each of us is thrown off the train of time', which will put all those birthdays in perspective. Yes, makes you think...
﻿

Everyone has two birthdays
according to the English essayist Charles Lamb,
the day you were born and New Year’s Day -

a droll observation to mull over
as I wait for the tea water to boil in a kitchen
that is being transformed by the morning light
into one of those brilliant rooms of Matisse.

“No one ever regarded the First of January
with indifference,” writes Lamb,
for unlike Groundhog Day or the feast of the Annunciation,

New Year’s marks nothing but the pure passage of time,
I realized, as I lowered a tin diving bell
of tea leaves into a little ocean of roiling water.

I like to regard my own birthday
as the joyous anniversary of my existence,
probably because I was, and remain
to this day in late December, an only child.

And as an only child -
a tea-sipping, toast-nibbling only child
in a bright, colorful room -
I would welcome an extra birthday,
one more opportunity to stop what we are doing
for a moment and celebrate my presence here on earth.

And would it not also be a small consolation
to us all for having to face a death-day, too,
an X drawn through a number
in a square on some kitchen calendar of the future,

the day when each of us is thrown off the train of time
by a burly, heartless conductor
as it roars through the months and years,

party hats, candles, confetti, and horoscopes
billowing up in the turbulent storm of its wake.
Posted by Siobhán at 12:05 am