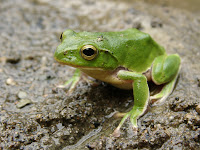 Oh the frog prince. Whatever became of him...? Marge Piercy knows ha -  a humorous indictment against marriage!

Remember the princess who kissed the frog
so he became a prince? At first they danced
all weekend, toasted each other in the morning
with coffee, with champagne at night
and always with kisses. Perhaps it was
in bed after the first year had ground
around she noticed he had become cold
with her. She had to sleep
with heating pad and down comforter.
His manner grew increasingly chilly
and damp when she entered a room.
He spent his time in water sports,
hydroponics, working on his insect
collection.
Then in the third year
when she said to him one day, my dearest,
are you taking your vitamins daily,
you look quite green, he leaped
away from her.
Finally on their
fifth anniversary she confronted him.
“My precious, don’t you love me any
more?” He replied, “Rivet. Rivet.”
Though courtship turns frogs into princes,
marriage turns them quietly back.