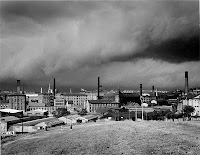 Because it's George Orwell day today - here's a poem about modern British culture (written in 1937 by John Betjeman) - the innate inertia of industrialisation and its effect on suburban life. Needless to say, it caused uproar when it was published...

Come friendly bombs and fall on Slough!
It isn't fit for humans now,
There isn't grass to graze a cow.
Swarm over, Death!

Mess up the mess they call a town -
A house for ninety-seven down
And once a week a half a crown
For twenty years.

And get that man with double chin
Who'll always cheat and always win,
Who washes his repulsive skin
In women's tears:

And smash his desk of polished oak
And smash his hands so used to stroke
And stop his boring dirty joke
And make him yell.

But spare the bald young clerks who add
The profits of the stinking cad;
It's not their fault that they are mad,
They've tasted Hell.

And talk of sport and makes of cars
In various bogus - Tudor bars
And daren't look up and see the stars
But belch instead.

In labour-saving homes, with care
Their wives frizz out peroxide hair
And dry it in synthetic air
And paint their nails.

Come, friendly bombs and fall on Slough
To get it ready for the plough.
The cabbages are coming now;
The earth exhales.