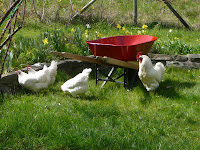 Now here'a a famous poem, a real classic - (if you Google 'red wheelbarrow', your first result will be this poem).
Why so famous? Well, first off, because of its experimental nature, it caused quite a stir after it was first published in 1923 and long thereafter.
It broke a lot of rules and introduced a new coup for Modernist poetry: Imagist and almost Idea-ist. Williams' defining maxim was 'No ideas, but in things' and this poem represents this perfectly - so much depends upon not the ideas buried in the poem, in its meaning,  but the subject matter itself (which is usually merely the means to an end - ie meaning - in a poem) taken at face-value, on its own standing, like a painting would be.
The poem's endearing simplicitiy and its speculative content have ensured its popular appeal. Why does so much depend upon the red wheelbarrow exactly?  Does the scene represent something else? Is it making an existential comment? Is its simplicity a cue for imaginative discourse? Or is it, simply, meant to be taken, just as it is? So much depends upon the simple scenes in life, the things that make up these scenes, the impromptu props of living, standing as objects of beauty and awe and thought...?
Or maybe it forces us to see that we impose meaning on everything? Maybe it is meaningless?
Well, that's the beauty of poetry. It can mean whatever you want it to mean. Meaning is subjective, maybe even secondary. Because poetry offers a lot more than that, of which this poem is proof proper.

so much depends
upon

beside the white
chickens.