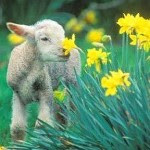 'Easter is the most sparkling of all the fetes since it brings back not only the sun but all the works of the sun including those works of spirit that are specifically what might be called Spring works: the renewed forces of the desire to live and be a part of life...' ~ Wallace Stevens

For now He cometh forth
Winter flies to the north,
Folds wings and cries
Amid the bergs and ice.

Yea, Death, great Death is dead,
And Life reigns in his stead;
Cometh the Athlete
New from dead Death's defeat.

Cometh the Wrestler,
But Death he makes no stir,
Utterly spent and done,
And all his kingdom gone.