Day 128: Excursion to the Planet Mercury 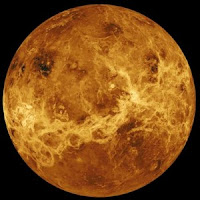 If poetry is a product of the imagination, then this poem is a testament to that faculty's immense power. Mercury. The planet Mercury. Who would think to write a poem on it? What would you write? How would you describe it?
Well, if you're Alice Oswald, wonderfully. A 'tiny iron island' of a planet, a 'violently magic little place' where the 'sky is racing along/ like a blue wrapper flapped and let go.' Her range of figurative language is astonishing. Mercury is a place with 'nothing but glimmering beginnings/making ready to manifest' with 'feather-footed winds.'
Most of all, it is a place open to the imagination and as Alice Oswald shows here, that kind of place can be anything you want it to be.

certain evenings a little before the golden
foam of the horizon has properly hardened
you can see a tiny iron island
very close indeed to the sun.

all craters and mirrors, the uncanny country
of the planet Mercury - a mystery
without I without air,
without you without sound.

in that violently magic little place
the sky is racing along
like a blue wrapper flapped and let go
from a car window.

but it shales it slides
the whole concept is only
loosely fastened
to a few weak tweaks of gravity.

o the weather is dreadful there:
thousand-year showers of dust
all dandruff and discarded shells
of creatures too swift to exist:

no nothing accumulates there
not even mist
nothing but glimmering beginnings
making ready to manifest.

as for the catastrophe
of nights on mercury,
hiding in a rock-smashed hollow
at about two hundred degrees below zero

the feather-footed winds
take off their guises there,
they go in gym shoes
thieving and lifting

and their amazed expressions
have been soundproofed, nevertheless
they go on howling
for gladness sheer glaadness