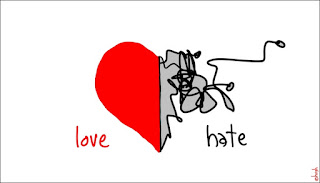 Surprisingly, here's a poem that doesn't give hate a bad rap. Instead, Frank O'Hara says that it's 'cleansing and allows you to be direct.' Hmm.

There are other truths in this poem too, some vague and some clear, some exaggerated. But one of them that most certainly can't be denied is the fact that 'hurt and hate go hand in hand.'  One leads to the other, whichever comes first.


Poem (Hate Is Only One of Many Responses) - Frank O'Hara

Hate is only one of many responses
true, hurt and hate go hand in hand
but why be afraid of hate, it is only there
think of filth, is it really awesome
neither is hate
don't be shy of unkindness, either
it's cleansing and allows you to be direct
like an arrow that feels something

out and out meanness, too, lets love breathe
you don't have to fight off getting in too deep
you can always get out if you're not too scared

an ounce of prevention's
enough to poison the heart
don't think of others
until you have thought of yourself, are true

all of these things, if you feel them
will be graced by a certain reluctance
and turn into gold

if felt by me, will be smilingly deflected
by your mysterious concern
Posted by Siobhán at 1:02 pm