Day 118: Anything Could Happen 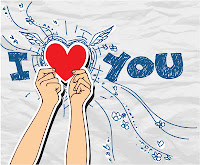 Telling someone you love them is never an easy thing. Just think of all the things that could go wrong! The many 'what could happens' bubbling up in your mind that make you anticipate the experience with both dread and excitement.

Well, I bet you've never thought of these outcomes - both good and bad, downright hilarious and strange and sweet.

1.
She swoons, falls into his arms
and they live happily ever after.

2.
She kisses him: the restaurant applauds.

3.
There’s a pin-drop silence. She turns
the knife in her hand, slowly.

4.
His heart bursts in his mouth before he can say the words.
It splatters the table, ruins her dress, and she never forgives
him.

5.
He’s interrupted by a handsome man from another table
who asks if he can cut in. She accepts, of course,
and waltzes off to an orchestra of cutlery, side-plates,
strummed napkins and warm bread. He seethes, turns bald
and tells the story to every man he meets.

6.
She falls in love with the waiter.

7.
She falls in love with the waitress.

8.
She starts by saying she’s quitting the country,
that there’s nothing in London to keep her.

9.
He loses his voice, has to write it all down.
She spills a glass of wine, the ink blurs and swims
across the page. I’m sorry she says, and he nods,
his eyes turning to crystal.

11.
They have passionate sex in the single toilet.
Outside, a lengthening queue tuts and frets.
Someone presses their ear to the door.

13.
They have 3 children. Some night, she tells them
(again) how their father won her heart
over chicken gyoza and ebi katsu.
Whenever he hears this, something in him rises
like a bull-chested spinnaker.

14.
Her mobile rings. The moment falls, like a crumb,
to the napkin in her lap. She brushes it away.

15.
He learns a new language - says it in French or Swahili.
She’s mightily impressed, but doesn’t understand.

16.
She chokes on a noodle. The tips of her fingers turn blue
as she fights for breath, and fails. Later, he learns to love
the bite of alcohol and numbs his tongue with ice.

17.
She chokes on a noodle. He Heimlichs her.
She sees him in a different light,
as he dabs the sparkling sputum
from her lips.

18.
He watches the way she eats
and thinks better of saying anything.

19.
Before he can speak, she leans across the table,
fingers barely touching the corners of his mouth,
and says I know, already. I know.