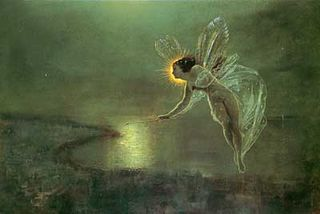 In Ireland we have a peculiar saying to denote madness - we say a person is 'away with the fairies.' How unfair really. For going by this poem from Yeats, away with the fairies seems a most pleasant destination, away from all the 'weeping' of the world into the magic and beauty of nature. Escapism, in other words, to the imagination, that most fertile world of fantasy.
Yeats uses the influence of old Irish myths and legends here, but the poem does have a deep ring of truth to it - who wouldn't want to be tempted away by the fairies, away from all their sorrows? Lured into an imaginative world where the burdens of reality drop away? But what the poem really urges is for a young child to escape to  the sanctuary of his imagination, before the adult world can corrupt him with all its sorrows and woes.
Yeats, by the way, was a fervent believer in fairies. He was even accused of 'being away with the fairies' himself at many points in his career. Maybe that could explain his uniquely dazzling and unequalled collection of work and reputation as a grand poet. Because poets are believers are they not, in magic, above all else??
(This poem choice was inspired by stumbling upon this wonderful quote from LM Montgomery - There is such a place as Fairyland... which backs up my immediate previous statement!)

Where dips the rocky highland
Of Sleuth Wood in the lake,
There lies a leafy island
Where flapping herons wake
The drowsy water rats;
There we've hid our faery vats,
Full of berrys
And of reddest stolen cherries.
Come away, O human child!
To the waters and the wild
With a faery, hand in hand,
For the world's more full of weeping than you can
understand.

Where the wave of moonlight glosses
The dim gray sands with light,
Far off by furthest Rosses
We foot it all the night,
Weaving olden dances
Mingling hands and mingling glances
Till the moon has taken flight;
To and fro we leap
And chase the frothy bubbles,
While the world is full of troubles
And anxious in its sleep.Come away, O human child!
To the waters and the wild
With a faery, hand in hand,
For the world's more full of weeping than you can   understand.

Where the wandering water gushes
From the hills above Glen-Car,
In pools among the rushes
That scarce could bathe a star,
We seek for slumbering trout
And whispering in their ears
Give them unquiet dreams;
Leaning softly out
From ferns that drop their tears
Over the young streams.Come away, O human child!
To the waters and the wild
With a faery, hand in hand,
For the world's more full of weeping than you can   understand.

Away with us he's going,
The solemn-eyed:
He'll hear no more the lowing
Of the calves on the warm hillside
Or the kettle on the hob
Sing peace into his breast,
Or see the brown mice bob
Round and round the oatmeal chest.For he comes, the human child,
To the waters and the wild
With a faery, hand in hand,
From a the world more full of weeping than he can   understand.
Posted by Siobhán at 2:51 pm