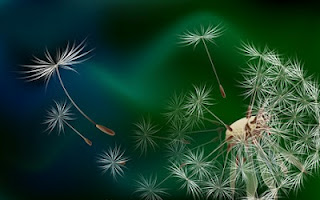 I've said it before, but I'll say it again - I love Alice Oswald's poetry! Love the way she makes words fly.

Like here in this commissioned poem 'Beaufort Poem Scale' she wrote for environmental/arts project, Battle for the Winds this year.

Here's what she had to say about her subject matter: "Everything you write about the wind really has to be about something else, because the wind itself is so non-existent. I like the way the Beaufort Scale [a system used to estimate wind speed based on observation of its effects] categorizes something so abstract and undefinable. That is partly what drew me to the project. I regard the words as secondary to the silences in my poetry, so I'm drawn to write about things that will exist without the words. The poems are full of gaps and silences through which something that isn't linguistic can be heard."

Indeed. And look at the syntax of the title - it suggests what the poem is about and what can be likened to wind a thousand times over - inspiration.

As I speak (force 1) smoke rises vertically,
Plumed seeds fall in less than ten seconds
And gossamer, perhaps shaken from the soul's hairbrush
Is seen in the air.

Oh yes (force 2) it's lovely here,
One or two spiders take off
And there are willow seeds in clouds

But I keep feeling (force 3) a scintillation,
As if a southerly light breeze
Was blowing the tips of my thoughts
(force 4) and making my tongue taste strongly of italics

And now my voice (force 9) like an umbrella shaken inside out
No longer shelters me from the fact (force 10)
There is suddenly a winged thing in the house,
Is it the wind?