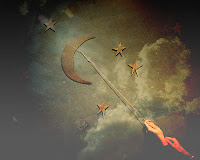 A sestina is a poem consisting of 6 six-line verses, ending in a 3 line envoi. The words that end each line of the first stanza are used as line endings in each of the following stanzas, rotated in a set pattern. Typically, it is a complex form that serves to echo the emotional content of the poem.

It is used to great effect here by Elizabeth Bishop, describing a sorrowful childhood, in almost fairytale-like manner.  The 'equinoctial tears' are those occurring at the time of the Equinox, which is, of course, the time we're in now, a time of change, redress and rebalance.

September rain falls on the house.
In the failing light, the old grandmother
sits in the kitchen with the child
beside the Little Marvel Stove,
reading the jokes from the almanac,
laughing and talking to hide her tears.

She thinks that her equinoctial tears
and the rain that beats on the roof of the house
were both foretold by the almanac,
but only known to a grandmother.
The iron kettle sings on the stove.
She cuts some bread and says to the child,

It's time for tea now; but the child
is watching the teakettle's small hard tears
dance like mad on the hot black stove,
the way the rain must dance on the house.
Tidying up, the old grandmother
hangs up the clever almanac

on its string. Birdlike, the almanac
hovers half open above the child,
hovers above the old grandmother
and her teacup full of dark brown tears.
She shivers and says she thinks the house
feels chilly, and puts more wood in the stove.

It was to be, says the Marvel Stove.
I know what I know, says the almanac.
With crayons the child draws a rigid house
and a winding pathway. Then the child
puts in a man with buttons like tears
and shows it proudly to the grandmother.

But secretly, while the grandmother
busies herself about the stove,
the little moons fall down like tears
from between the pages of the almanac
into the flower bed the child
has carefully placed in the front of the house.

Time to plant tears, says the almanac.
The grandmother sings to the marvelous stove
and the child draws another inscrutable house.