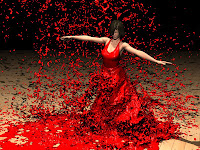 As it's Valentine's Day later in the week I thought I'd join in on all the hype by posting love poems (and anti-love poems!) all week. And what better way to start than with a break-up poem ha.

What a great take on the end of love here by Anne Sexton, encompassing all the feelings that go with it in stunning imagery. But as well, the shocking quiet truth underneath it all:

When a life is over,
the one you were living for,
where do you go?

I am the love killer,
I am murdering the music we thought so special,
that blazed between us, over and over.
I am murdering me, where I kneeled at your kiss.
I am pushing knives through the hands
that created two into one.
Our hands do not bleed at this,
they lie still in their dishonor.
I am taking the boats of our beds
and swamping them, letting them cough on the sea
and choke on it and go down into nothing.
I am stuffing your mouth with your
promises and watching
you vomit them out upon my face.
The Camp we directed?
I have gassed the campers.

Now I am alone with the dead,
flying off bridges,
hurling myself like a beer can into the wastebasket.
I am flying like a single red rose,
leaving a jet stream
of solitude
and yet I feel nothing,
though I fly and hurl,
my insides are empty
and my face is as blank as a wall.

Shall I call the funeral director?
He could put our two bodies into one pink casket,
those bodies from before,
and someone might send flowers,
and someone might come to mourn
and it would be in the obits,
and people would know that something died,
is no more, speaks no more, won't even
drive a car again and all of that.

When a life is over,
the one you were living for,
where do you go?

I'll work nights.
I'll dance in the city.
I'll wear red for a burning.
I'll look at the Charles very carefully,
wearing its long legs of neon.
And the cars will go by.
The cars will go by.
And there'll be no scream
from the lady in the red dress
dancing on her own Ellis Island,
who turns in circles,
dancing alone
as the cars go by.
Posted by Siobhán at 5:19 pm