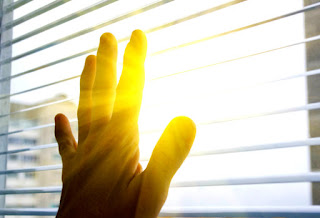 Is there anything more beautiful than gold sunlight streaming in a window? I think not - especially after months of none! Billy Collins, believe me, you do not exaggerate.

I don’t want to make too much of this,
but because the bedroom faces east
across a lake here in Florida,

when the sun first rises
and reflects off the water,
the whole room is suffused with the kind
of golden light that might travel
the length of a passageway in a megalithic tomb
precisely at dawn on the summer solstice.

Again, I don’t want to exaggerate,
but it reminds me of a brand of light
that could illuminate the walls
of a hidden chamber full of treasure,
pearls and gold coins overflowing the silver platters.

I feel like comparing it to the fire
that Aphrodite lit in the human eye
so as to make it possible for us to perceive
the other three elements,

but the last thing I want to do
is risk losing your confidence
by appearing to lay it on too thick.

Let’s just say that the morning light here
would bring to anyone’s mind
the rings of light that Dante
deploys in the final cantos of the Paradiso
to convey the presence of God
while bringing The Divine Comedy
to a stunning climax and leave it at that.
Posted by Siobhán at 12:04 pm