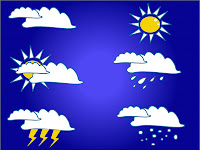 Where I live, people talk about the weather a lot. It takes over from conventional greetings. What you hear instead of 'Hi, how are you?' are meteorological observations such as 'lovely day,' 'beautiful day,' 'it's turned cold now,' 'a bit showery', 'you couldn't trust it could you,' 'terrible day' - which substitute for the universal personal greetings.

Well, it's been a disappointing day
in most parts, has it not?
So, let's have a look at tomorrow's charts
and see what we've got.

Let's start with the head, where tonight
a depression centred over the brain
will lift. Dark clouds move away
and pain will be widespread but light.

Exposed areas around the neck and shoulders
will be cold (if not wearing a vest)
and there may be dandruff on high ground
especially in the west.

Further inland:
Tomorrow will begin with a terrible thirst.
Lungs will be cloudy at first,
in some places for most of the day,
and that fog in the throat
simply won't go away.
So keep well wrapped up, won't you?

For central areas the outlook is fairly bright
although the liver seems unsettled
after a heavy night,
and a belt of high pressure, if worn too tight,
may cause discomfort.

Further south it will be mainly dry
although showers are expected in private parts
and winds will be high,
reaching a gale force incontinent.
Some thunder.

Around midnight, this heavy front
is expected to move in,
resulting in cyclonic highs
in and round the upper thighs.

Temperatures will rise
and knees may well seize up in the heat.
And as for the feet,
perspiration will be widespread
resulting in a sweaty bedspread.

And the outlook for the weak?
Not as good as for the strong, I'm afraid.
Goodnight.