Day 67: After the Storm, Stars 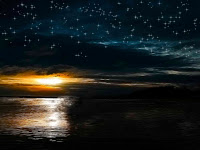 In a week of remembering the moon landing, an approaching blue moon, and the beginning of the tropical hurricane season in the US, this poem makes perfect sense. For what else is the earth but 'an island in archipelagoes of stars'?


After the Storm - Derek Walcott

There are so many islands!
As many islands as the stars at night
on that branched tree from which meteors are shaken
like falling fruit around the schooner Flight.
But things must fall, and so it always was,
on one hand Venus, on the other Mars;
fall, and are one, just as this earth is one
island in archipelagoes of stars.
My first friend was the sea. Now, is my last.
I stop talking now. I work, then I read,
cotching under a lantern hooked to the mast.
I try to forget what happiness was,
and when that don't work, I study the stars.
Sometimes is just me, and the soft-scissored foam
as the deck turn white and the moon open
a cloud like a door, and the light over me
is a road in white moonlight taking me home.
Shabine sang to you from the depths of the sea.
Posted by Siobhán at 12:18 am