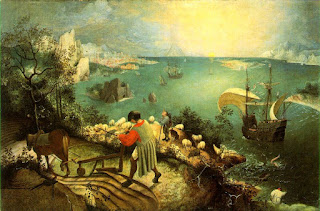 This is perfectly illustrated in the painting above, Breughel's 'The Fall of Icarus' which shows the mythic character's death plunge from the sky to sea. But you'll have to look closely to see him, head first in the water. It's as if it's a mere insignificant detail in the scene.

This is very much the case alright with death and hurt and disappointment. People hardly notice. For life must go on after all.

Here's William Carlos Williams' take on the painting, who manages to structure the poem exactly like the painting, with the fall coming quite casually at the end, a by-the-way footnote.

Landscape with the Fall of Icarus - William Carlos Williams

According to Brueghel
when Icarus fell
it was spring

a farmer was ploughing
his field
the whole pageantry

of the year was
awake tingling
near

the edge of the sea
concerned
with itself

sweating in the sun
that melted
the wings' wax

unsignificantly
off the coast
there was

a splash quite unnoticed
this was
Icarus drowning